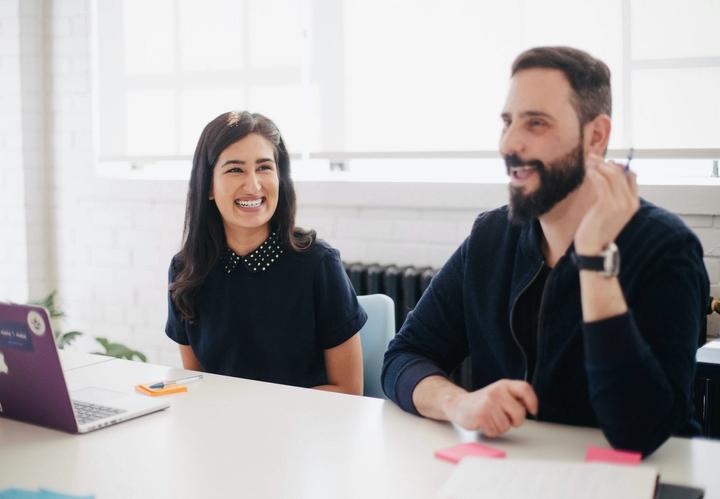 How to Create a Culture of Continuous Feedback

Creating a culture of continuous feedback is the way forward, yet, many struggle to give and receive feedback. In this article, I’ll walk you through tips on how to incorporate successful feedback, including the radical candor model and more.

You are most likely already aware of the benefits that feedback brings to organizations. But if your company is like most, feedback is still seen as an isolated exercise, limited to the annual performance review or giving praise when a team has reached their goals. To really reap the benefits of feedback, you need to enable a culture of continuous feedback. Regular, mutual feedback can lift engagement and performance to new levels, propelling people to solve business challenges more efficiently - and more creatively.

Building a culture of continuous feedback doesn’t come naturally; it has to be intentional. This may seem daunting, but every action you take will foster a behaviour that will have long-term critical impact on your business.

In this article, I will walk you through the reasons why a culture of continuous feedback is so important, and give you practical tips on how to implement it within your organization.

Why is Feedback Important?

First, let’s start with a formal definition of feedback. Session defines feedback as:

‘’Feedback is the art of communicating perceived information about an action, event, or process back to a person, a team or an organization in order for the action, event or process to become clearer, better or changed.’’

In short, feedback is about communicating - “feeding back” - your impressions to other people. In a business context, it will most often be centered around how people perform and interact at work.

Why is this important?

As the expression goes, “the eye cannot see itself” - therefore we need an outside perspective to get the full picture of what works and what should improve. It could, for instance, be about how we interact with our colleagues, or the quality and efficiency of work processes. Humans are creatures of habit, so without feedback, we’ll continue doing what we always did, not recognizing that it might no longer add value. When we give feedback on a regular basis with the purpose of making things better, it is of immense value to the growth of people and businesses.

Unfortunately, this does not happen in most cases. Instead, we often land in one of two extremes (you may want to pause and think about which one you most often land in?):

The result is that we miss out on opportunities for improvement, and in the process we might even spur unnecessary conflicts. If we instead succeed in creating a culture of continuous feedback, it will pay off in several ways: when people get a chance to grow personally and professionally, it creates engagement and stronger performance, thus improving business results. Sounds straightforward - but why do most companies still rely on yearly performance reviews? Why do we allow poor performance or bad behaviour to go on long after we notice it, until a termination seems to be the only option? Well, because feedback awakens some of our most fearful instincts.

Why is Feedback so Hard?

An even more challenging thing is corrective feedback - also referred to as negative feedback - which aims at changing or correcting a behaviour. Even when delivered with a positive intent of making things better, it awakens our deepest fears: being disliked, or even potentially excluded from the community.

Research by Dr. Martin Paulus, an Adjunct Professor of Psychiatry at the University of California, shows that we respond poorly to negative feedback because of our brain’s amygdala, which activates our fight or flight response. So that gut-wrenching feeling you get when receiving corrective feedback is hardwired into your brain. On top of that, most people have a tendency to fixate much more on one small item of negativity than on an influx of positive feedback. Any tiny piece of negative feedback makes us raise our defences and focus on the perceived threat instead of looking for the positive intent and opportunity for improvement.

When beginning to practice continuous feedback, it can therefore be useful to start with communicating about what works well. As mentioned, this can be challenging in itself, so it’s a good exercise to start practicing feedback. Not to mention the tremendous value that positive recognition brings to engagement and performance in a team!

Praise for Positive Feedback: Why It Matters

A common misconception is that feedback is only about correcting behaviour, but this is not the case. A great feedback culture happens when you also recognize and acknowledge the good you see in people and their work. The Forbes article ‘’In Praise of Positive Feedback’’ points to the benefits that positive feedback can elicit: firstly, it helps employees feel confident and more appreciated, which helps them do a better job. Secondly, positive feedback builds trust, high morale and loyalty, which leads to stronger retention. It also enables people to give and receive corrective feedback more easily, because they get used to hearing positive things, leading to positive associations with feedback in general.

A way to nurture a culture of positive feedback is to start from the top - leaders are often role models in a company, so you need to remind them to point out when things go well. At the same time, you can encourage the team to give praise to each other. You can take the lead by facilitating initiatives, like asking everyone in a team meeting to share one thing they think the colleague next to them is doing well. You can also start a Slack or Teams channel where everyone can write praise for other team members’ accomplishments. A few kind words of recognition can go a long way in promoting a positive feedback culture.

When you have something positive to say, say it. And when you have suggestions for improvement, cut to the chase. If you succeed in creating a culture of continuous feedback, you will have plenty of opportunities to give both positive and corrective feedback. Just never forget the first - as this is fundamental to creating necessary trust and a positive attitude.

The Benefit of Continuous Feedback

As I previously touched upon, feedback can be outright discouraging if it only occurs on a quarterly or yearly basis, because it robs individuals and teams of the opportunity to grow continuously. Annual performance evaluations don’t really serve anyone: employees complain of biases and a sense of disconnection, while managers point to annual performance evaluations as bureaucratic, box-checking exercises.

In contrast, continuous feedback which is timely, and to the point, can engender meaningful and long-lasting results. For example, Gallup has found that when managers provide weekly instead of annual feedback, team members are:

Instead of waiting to offload all of your feedback at the annual performance meeting, you’ll get much more value from a continuous feedback loop. Remember, a healthy feedback culture is one where feedback is a deliberate exercise with clear expectations and a focus on team growth. Practicing constructive feedback means that even the more difficult corrective feedback should be both delivered and received with an open mind. Rather than being seen as offensive, it should empower people to act and implement the needed changes. No one is motivated to change when they are in fight-or-flight mode.

How To Provide Constructive Feedback

Now that we’ve looked at the benefits of a culture of continuous feedback, let’s look at what characterizes constructive feedback - the kind of feedback that enables positive change. Before delivering feedback, think about what you’ll say, how you’ll say it, and why. Remember that feedback is not about you getting things off your chest - it’s about the receiver getting useful input.

Therefore, constructive feedback should be:

The manner in which you provide feedback should signal that you are an ally, looking out for the individual’s and team’s best interests.

Now you know the benefits of continuous feedback, but how do you get started on introducing this in your organization? As mentioned, humans are creatures of habit, and if we’re not used to providing regular feedback, it won’t just happen. Culture is created by nurturing desired behaviors, so you need to train people on how to give and receive feedback. Like any skill, the art of giving feedback must be practiced on a continuous basis.

Here are some steps you can take to implement effective feedback training:

A Question of Honesty - the Radical Candor Model

The last thing I would like to touch upon in this article are some of the pitfalls we tend to fall into when giving feedback. The concept called Radical Candor, developed by Kim Scott, provides a useful framework for doing so:

First, here is a brief introduction to the concept: Radical Candor is a management philosophy based on the ability to care personally for others while also being able to challenge them. In her book Radical Candor: Be A Kick-Ass Boss Without Losing Your Humanity, Kim Scott defines feedback as an act of demonstrating care; if you do not give feedback, you show a lack of care, because you deprive people of opportunities for development. In Scott’s perspective, the optimal form of feedback is ‘’radical candor’’, in which you demonstrate that you personally care but also have the courage to challenge directly. You must be completely honest, but in a genuinely caring manner.

These two dimensions - care personally and challenge directly - creates a quadrant axis chart, which also depicts the three feedback pitfalls: Obnoxious Aggression, Ruinous Empathy, and Manipulative Insincerity. We can easily slip into one of these undesirable quadrants if we are not deliberate in our approach to feedback:

Feedback is about giving guidance. It includes both praise and criticism, highlighting wins and giving opportunities for development. Radical Candor is a useful framework for understanding why feedback to some people has a bad ring to it - most likely, they’ve been victims of one of the pitfalls described above. An important part of creating a culture of continuous feedback is therefore to clearly define what feedback means: the art of inviting joint problem-solving and giving constructive guidance for improvement. 100% honesty only works in a context of constructive collaboration. Feedback must always be sincere, but also caring and tactful.

Investing time and energy in fostering a culture of continuous feedback is vital for your company. It can directly increase performance, but also positively affects engagement and well-being, which strengthens long-term retention. The first step is creating a work environment where employees feel psychologically safe: allow for time to reflect and ask questions, and teach non-defensiveness.

The next step is to work on your own habits. Feedback must be carried out in a meaningful way. It should be used to both celebrate wins and correct mistakes. Aim to strike a balance of corrective and positive feedback - and make sure in both cases to be both caring and concrete. Not providing someone with feedback because you are afraid of hurting their feelings or think you are “too busy” is causing harm continuously. On the other hand, a constant flow of one-sided general praise or corrective feedback will not spur engagement, and can even result in the team feeling demoralized. Although implementing a model of continuous feedback requires training and deliberate practice, the benefits are well worth the investment - for people, and for business.

Head of People & Culture at Januar

Stine is a passionate facilitator, insightful communicator, and structured process consultant specializing in communication, culture and organizational development. She is Head of People & Culture at Januar, building a compliant gateway to the new digital economy for crypto businesses. At Januar, Stine works to strengthen the company's culture, as well as designing and implementing efficient, value-driven people processes.