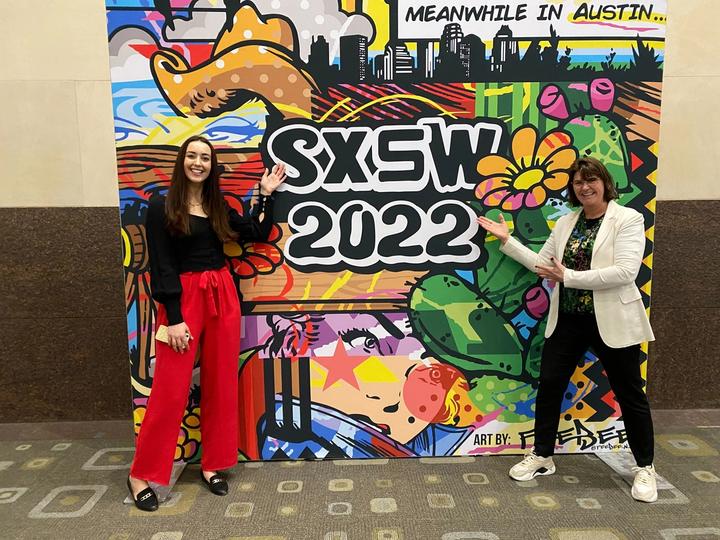 SXSW, based in Austin, Texas, is a conference that celebrates the convergence of tech, film, and music industries. In this piece you can read about the history and vision of the conference, as well as our main takeaways and overall themes from this year's SXSW.

South by Southwest®, abbreviated as SXSW, is an annual conglomeration of parallel film, interactive media, and music festivals and conferences organized jointly that take place in mid-March in Austin, Texas. It began in 1987 and has continued to grow in both scope and size every year.

South by Southwest®, abbreviated as SXSW, is an annual conglomeration of parallel film, interactive media, and music festivals and conferences organized jointly that take place in mid-March in Austin, Texas. It began in 1987 and has continued to grow in both scope and size every year.

In this article, we will run through SXSW’s history, mission, and 2022 highlights, as well as discuss our favorite moments from this year’s conference.

“SXSW’s mission is to welcome a diverse group of creative professionals and innovative companies to further develop careers and businesses whether it is through music, film or technology.”

The History of South by Southwest® (SXSW)

In 1987, a small group of people in Austin, Texas began a series of long discussions about the future of entertainment and media. The meetings were in the offices of The Austin Chronicle, and participants were sworn to secrecy. A fundamental opinion shared by the group was that the local creative and music communities were as talented as anywhere else on the planet, but were severely limited by a lack of exposure outside of Austin. In these discussions, music was a fundamental factor, but the group also were curious about art and other ideas. Inclusiveness and reaching for new things were core values. The solution that transpired was a diverse conference that would bring together an international group of people to Austin. The first event, held in March of 1987, saw an expected 150 registrants swell to 700 on the opening day. As hoped for, Austin’s charm won over the visitors, and SXSW took on a life of its own.

Growth was steady for the first seven years. For SXSW ’94, often remembered for the Johnny Cash keynote/performance, two new events – Interactive and Film – were introduced. It would mark a fundamental shift in how the world viewed SXSW. Still early in the paradigm shift created by the internet, the film and digital communities found a home in SXSW. The event has changed significantly since 1987, but at its core, SXSW remains a tool for creative people to develop their careers by bringing together people from around the globe to meet, learn and share ideas. Here is how SXSW has evolved over the years:

Who Goes to SXSW?

“South By Southwest has long been a sacred annual pilgrimage for brands,

tech companies and ad agencies alike, offering a heady mix of technology and

SXSW’s audience is incredibly diverse - and that’s what makes it so fun and interesting! Although the event is open to the public (with the cost of the ticket price), a number of heterogeneous groups primarily attend:

A number of emerging technological themes and trends were highlighted at this year’s event, namely regarding the metaverse, NFTs, and DAOs. Let’s first define these terms, before sharing what we have learned about them:

A few talks in particular stood out to us at this year's SXSW - both on DAO’s. In the first talk: “2022: The Year of the DAO” we listened to Flex Chapman talk about The Krause House and how the people behind this movement are trying to buy an NBA team. Pretty inspiring! It is “Power to the people” - on steroids! In the next session: "Move Over NFTs. Here Come the DAOs" - we listened to Kimbal Musk, Nadya Tolokonnikova and Alex Zhang. They took to the SXSW stage to present on the topic, and introduced us to the UkraineDAO, the Friends With Benefits DAO (where crypto meets culture) and the Big Green DAO (disrupting philanthropic hierarchies).

Tolokonnikova is a former member of the Russian protest punk rock group Pussy Riot, and the co-founder of UnicornDAO and UkraineDAO. Zhang co-founded the social club, DAO Friends With Benefits, and serves as its “mayor” (his self-chosen title), while Musk co-founded the philanthropic Big Green DAO. Throughout the discussion, the panelists described their distinct and contrasting use cases behind their own DAOs, and discussed how ownership, transparency, and localization are the main principles of a successful DAO. It was impressive to learn that the Ukraine DAO has raised an incredible $7 million dollars to go towards the Ukrainian crisis.

Within a general sense, DAOs are creating positive changes in today’s world. According to Forbes, DAOs are being used for many purposes such as investment, charity, fundraising, borrowing, or buying NFTs, all without intermediaries. For example, a DAO can accept donations from anyone around the world and the members can decide how to spend donations. Entrepreneurs like Gary Sheng believe Web3’s potential for decentralization can be used to take the core power out of the hands of a handful of companies that operate platforms like Google, Facebook, and Twitter and redistribute it to individual web users. In 2019, Sheng, a former Google software engineer, co-founded Civics Unplugged, an organization founded to train, fund, and provide community for young people who want to reform democracy. Through an initiative called Dream DAO, Civics Unplugged is training Gen Zers between the ages of 15 and 20 to be proficient both in developing and navigating Web3. We are very intrigued by the prospect of organizational power and disruption behind this way of organizing teams around a shared, common purpose. This will, for sure, change and influence the way we work - and take self organized teams to the next level.

In this age of emerging AR, VR, and XR technologies, the power of the metaverse has come to the fore, and is seemingly a buzzword that everyone is talking about. The metaverse was the talk of the town at this year’s SXSW, with everyone from technologists to creators and developers talking about its prominence. Although it’s undeniable that the emergence of more advanced technologies in the metaverse can, and will be problematic, it was also refreshing to see how certain organizations are using the power of technology to do good. One particular company at SXSW stood out to us - Khora Virtual Realities. For the past 6 years Khora has been cutting through the “hype” of the XR industry and pushing the boundaries of what these mediums can achieve, by producing more than 350 unique XR applications for businesses and organizations seeking to create real value within XR. An incredible part of Khora’s technology includes Khora Exposure, a component of their technology used by psychologists as a tool in exposure therapy which helps to alleviate anxiety problems. Khora has also created Challenge, a project to develop a novel therapy to aid people who suffer from schizophrenia and auditory hallucinations, specifically, hearing malevolent voices, which is frequently associated with this disorder.

Amy Webb’s talk on the Tech Trends Report for the launch of the Future Today Institute's 15th anniversary edition was also fascinating, presenting a deep dive into technological trends for 2022. The major trends covered reflected the major trends throughout SXSW 2022, including Artificial Intelligence (AI), Metaverse/Web 3, and Synthetic Biology. All of them, Webb said, have widespread applications and all could go very well or very badly, depending on how things turn out. Webb’s dialogue veered between starry-eyed forecasts of the future and stark warnings about budding technologies such as artificial intelligence and digital identities. Here are some of our key takeaways from Webb’s talk:

Session was invited to attend this year's SXSW thanks to the Danish Ministry of Foreign Affairs, Creative Denmark, DI - Dansk Industri and Denmark In New York who together organized a number of Danish tech companies to attend. The Danish venue was housed in Wanderlust Wine Co. in downtown Austin - the perfect location for mingling, networking, panel discussions, and enjoying some delicious catering and wine!

We were thrilled to have our CEO present on the topic of Nordic Leadership at the Creative Denmark House at SXSW. Over 700 people signed up! In Pernille’s presentation, she discussed the benefits, pitfalls, and outcomes of Nordic Leadership and why this way of leading is relevant for leaders all over the world wanting to engage a motivated workforce of the future. Stay tuned for an article on the subject, as well as some video snippets of key highlights from the talk.

Future of Work: Optimizing for Professionals of Tomorrow

Together, with Morten Becker Gronning, UX and Product Designer AeroGuest, Pernille also delivered a talk which discussed how technology is optimizing the workforce of tomorrow. Aeroguest works within the hotel industry to streamline check-in and check-out processes, and saves users time on traditional desk check-ins. Although AeroGuest and Session operate within completely different industries, Morten and Pernille were still able to draw a number of interesting parallels between our companies. Firstly, they discussed the accessibility of technology which produces an equal playing field. Those people that did not traditionally have access to in-person services can now avail of technology within the online space. We ended the panel by discussing how 3-D technology may come into effect in the future.

Highlights, Wine and Reflections from a Scandinavian Perspective

Towards the end of the conference, Pernille also attended a panel, ‘’Highlights and Wine” which was a wrap up session featuring a panel of CEO’s from different forefront startup companies from Denmark, including Session, Simon Max Bloch Lajboschitz from Khora Virtual Reality, Matias Møl Dalsgaard from GoMore, Dorthe Hove Olesen from Roskilde Festival, and Andreas Cleve, from Corti.

In this session the panelists were asked to reflect on their key takeaways and reflections on their own business strategy going forward following their participation in this year's SXSW. It was discussed how future business strategies may be influenced by developing tech, and Pernille addressed how the future of online coaching journey’s might be 3D, not 2D. Simon and Andreas also shared some particularly interesting opinions on the future of the metaverse going forward.

SXSW exceeded our expectations even more than we thought it would! The people that we met, the companies that we were introduced to, and the new ideas that we discovered were all incredible. We left SXSW feeling rejuvenated, revitalized and excited for the future of work and leadership!

Although the Session team had an incredible experience, it was also difficult to stay truly present, knowing what is going on in Ukraine. During the conference, we launched our initiative holdstrong.org, which we hope a lot of people will benefit from. We hope that by offering our platform as a medium for establishing the connection between those in need of emotional support with those who can offer it, will offer a tiny bit of relief for those impacted by the war. Please sign up as a volunteer, if you have the resources to help out - and do not hesitate to sign up, if you are in need of emotional support.

On behalf of Session, we would like to again thank the Danish Ministry of Foreign Affairs, Creative Denmark, DI - Dansk Industri and Denmark In New York for organizing this amazing experience.

Niamh is an expert marketing specialist with First Class Honors MA in International Marketing. Niamh crafts targeted articles and other relevant material for our esteemed readers and clients.